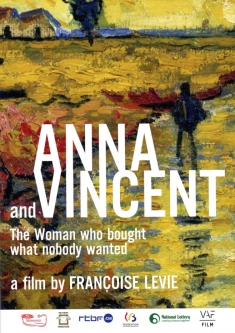 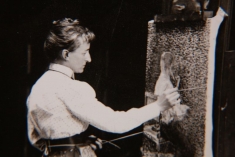 During his lifetime, Vincent Van Gogh sold one single painting.

To Anna Boch, a Belgian painter and maecenas, who bought his ‘The Red Vineyard’ at the very controversial Van Gogh participation during the annual ‘Salon des XX’ in the Museum of Fine Arts in Brussels in 1890.
Anna was not just an ordinary painter, she was the only woman to be part of the avant-garde movement called Les Vingt of which James Ensor, Theo Van Rijsselberghe, Felicien Rops, Fernand Khnopff, Jan Toorop and Auguste Rodin were members and Claude Monet, Auguste Renoir, James Wistler, Paul Gauguis, Toulouse Lautrec were also their guests. She was the daughter of the renowned ceramics factory Royal Boch.

Her brother Eugène Boch, a painter in his own right, befriended Vincent Van Gogh in Arles and Van Gogh immortalised Eugène in his famous painting ‘The Poet’. That same year Vincent Van Gogh dies. Anna buys a second work. She acknowledges the importance of Van Gogh, when nobody else did. For years she paints in the shadow of both paintings and struggles with Van Gogh’s genius, until 15 years later, she accepts her defeat and sells both works as ‘they prevented her from painting.’ How to explain this impossible rivalry between a woman who didn’t leave big marks in the history of painting and a genius painter, now admired universally? Anna and Eugene Boch are the protagonists who carry the film. There are historical evocations and the vivid correspondence between Eugene from sunny South of France and Anna in the family castle in grey La Louviere, Belgium brought off-screen. There are Vincent Van Gogh’s letters to his brother Theo where he talks about Anna and Eugene, about the Borinage region in Belgium, where heused to live and of where he comments on his paintings. There is also the letter that Van Gogh wrote to Eugene Boch. But the real protagonists of ‘Anna and Vincent’ are the paintings themselves: of Van Gogh, of Anna and Eugene Boch, Ensor, Van Rysselberghe, Isidore Verheyden, Gauguin, Seurat and Signac. In 2015 it is exactly 125 years since Vincent Van Gogh died. The four countries where he lived - The Netherlands, Belgium, England and France- honour him with several prestigious art manifestations. ‘Anna and Vincent’ casts a very intriguing light on Vincent Van Gogh against the backdrop of the revolutionary artistic landscape in Belgium and France between 1890 and 1906